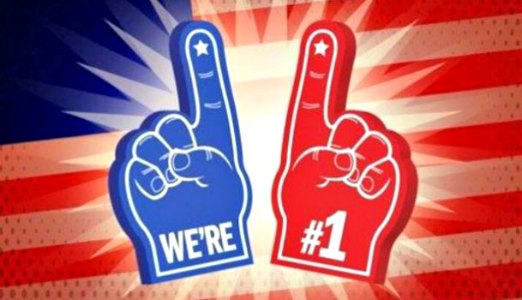 Today, after winning a big game it’s common for athletes and fans to chant, “We’re number one,” in a classless display of self-praise that comes off as conceit and disrespectful taunting. I sometimes feel that way about materials praising America. Still, national pride is important. Reminders about the high principles on which this nation was based are essential to keep our idealism alive.

A listener once sent me an essay commenting on a report that someone in Pakistan had offered a reward to anyone who killed an American. To tell potential assassins what to look for, the unidentified author wrote that it’s hard to identify Americans because they are of every nationality and religion. In fact, he said, “there are more Muslims in America than in Afghanistan. The only difference is that in America they are free to worship as each of them chooses. An American is also free to believe in no religion. For that, he will answer only to God, not to the government or to armed thugs claiming to speak for the government and for God.”

This is a legacy of freedom we have a right to be proud of. We also can be proud that despite high rhetoric, no other country gives as much or as often to aid the poor and oppressed, including those in Afghanistan.

We shouldn’t boast or brag or claim superiority. After all, what we do is often in our self-interest. But we should embrace for all to see the ideals that lead us to what Lincoln called “our better angels.”