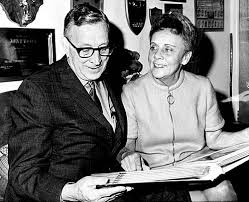 On Valentine’s Day  millions of men pay special tribute to a woman they love by buying her flowers, a balloon, a cute stuffed toy, or candy. Many took their Valentine out to dinner and lots of men gave their special lady jewelry or other gifts. Well, all those men — including me — are sad amateurs when it comes to expressing meaningful love and devotion.

John Wooden, the legendary UCLA basketball coach who died in 2010 just four months short of his 100th birthday, lost his wife Nell in 1985. They spent 53 years living together in marriage and he spent the last 25 years of his life paying tribute to her.

Since her passing, Coach Wooden kept a monthly ritual. On 21st of each month, he wrote a letter telling her he loves her, that he missed her, and that he couldn’t wait to see her again.

Rick Reilly, the Sports Illustrated columnist, described this extraordinary ritual: “He’ll fold the letter once, slide it into a little envelope and walk into his bedroom. He’ll go to the stack of love letters sitting there on her pillow, untie the yellow ribbon, place the new one on top and tie the ribbon again.”

At the end there were well over 200 letters to Nell on the pillow, and this ever-loving husband slept next to them on his side of the bed, on top of the sheets covered only with the same bedspread they shared as a couple. (See photo above, which includes the license plate from Nell Wooden’s car)

This enduring, profound, undying devotion shone as a guiding beacon, a north star of love, that put heart-shaped boxes and helium balloons to shame.

A deeply religious man, John Wooden was comforted by his certainty that he would join the love of his life when his time on this small globe is over.

Whether you believe in heaven or not, you’d be foolish not to believe he found a way to be with her again.

*I had the great fortune of personally knowing and working with the coach in establishing the Josephson Institute of Ethics’ Pursuing Victory With Honor program. He was the single most impressive man I’ve ever met.

Here’s a wonderful video of his love

You can see a video of an interview of him I did with him here. 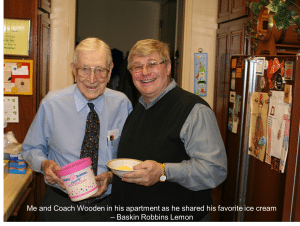