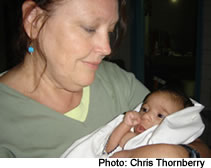 Hi, this is Michael Josephson for CHARACTER COUNTS! with “Something to Think About”

A few years ago, I told this story on the radio and it generated a lot of disagreement.

Jack was excited when he was given an unexpected bonus check of $1,000 from his employers. He was anxious to rush home to tell his family, but before he got to his car, a desperate-looking woman holding a baby who looked quite sick asked him for a few dollars. She said her child was dying and she showed him a letter from a hospital saying they could not give her the very expensive medicine he needed.

Jack looked at his check and then at the baby. Acting on impulse, he endorsed the check to the woman, saying, “Use this to do what you can for your baby.”

When he told his family what he’d done, his wife was silent but his teenage son ridiculed him.

Deflated, Jack said, “We don’t need the money. It felt like the right thing to do.”

A week later, his son waved a newspaper article in his face reporting that a woman with a baby was arrested for scamming people. “This is the lady you gave the money to, isn’t it?” he asked contemptuously.

“Yes,” Jack replied quietly and then he suddenly beamed with joy.

“What are you smiling about?” his son demanded. “She made a fool of you.”

“Yes, but there’s something much more important,” Jack said, “This means the baby’s not dying.”

His son declared, “You’re an even bigger fool than I thought.”

After a long pause, Jack’s wife embraced her husband lovingly. “There are two ways to look at this and I choose to be awfully proud to be married to a man with such a generous heart. You’re lucky to have him as a dad.”

Who was right – the son or the wife?

You can receive these commentaries by e-mail each week by subscribing at our newsletter signup page,  you also can receive them each day (along with videos and all other contents of Michael Josephson’s What Will Matter blog) by downloading our app for smart phones. Finally, you can subscribe to the podcasts from iTunes.