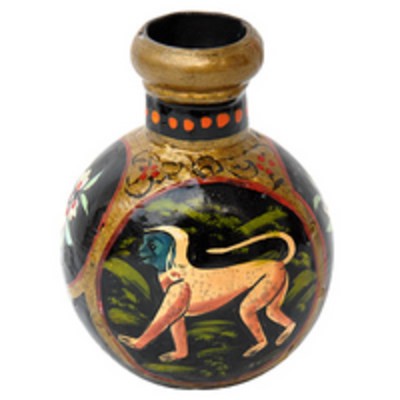 Many years ago a man came to a village in India to catch monkeys so he could sell them to zoos. The monkeys, however, were very clever and every sort of trap he set failed. A young boy watched the man’s pathetic efforts and laughed.

The boy went to his home and took a clay pot with a narrow neck. He placed a few nuts around the pot and put lots of nuts inside. He then tied the pot to a tree and he told the man, “We should have a monkey in a few hours. Let’s wait in the village. The monkey will call us when he is ready.”

Sure enough, a band of monkeys soon discovered the nuts and the pot. One slipped his hand in the pot and grabbed a handful of nuts, but he couldn’t pull his hand out of the narrow opening of the pot because his fist was clenched. The monkey panicked and started making loud noises. Some of the other monkeys tried unsuccessfully to pull the pot off his hand.

The boy and the man heard the ruckus and the boy got a sack. As they approached the monkeys they all ran away except the one with its hand in the pot. The boy grabbed the monkey and the pot. The man was amazed and asked the boy the secret of his monkey trap. “Why was it so easy for the monkey to get his hand in but so hard to get it out?”

The boy laughed and said, “The monkey could have easily got his hand back out and escaped, but he would have had to let go of the nuts in the pot, and he just wasn’t willing to let go. They never are.”

What lessons can be learned from this story? Do people sometimes trap themselves by holding onto things that they should let go? Do you?

This story is often used to illustrate the power of greed. People get trapped by the trappings of success, by wealth, and by a limitless desire to acquire and hold onto material things — even when the things they hold do not give them what they want or need. But there are other dimensions to the story as well. Many people trap themselves by holding onto negative feelings — resentment, anger, and jealousy — that both lessen and limit their lives. Like the monkey who derives no pleasure or nourishment from the nuts he holds in his hand, we can derive nothing of value from these negative emotions. Many of us could improve our lives instantly by the simple act of letting go.

It’s so simple, yet so hard.