As we view the spectacle of the 2012 London Olympics I want to share a condensed history of the Games.

Legends differ on the exact reason, but it’s pretty certain that the first Olympic Games were conducted in Greece in 776 B.C. Thereafter, they were held every four years (called an Olympiad) for nearly 12 centuries.

During the Games, a temporary global truce was declared so athletes from warring countries could compete. Only male athletes participated, and they competed in the nude. Victors were crowned with wreaths from a sacred olive tree thought to have been planted by Hercules (Heracles) behind the temple of Zeus. They were also given substantial cash rewards.

Emperor Theodosius I thought the Games were remnants of pagan worship and abolished them in 393 A.D. 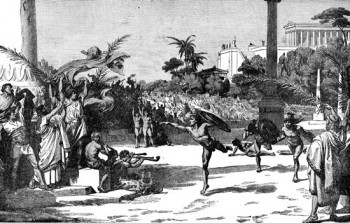 De Coubertin had more noble ambitions than his ancient predecessors. He embodied in the founding documents the notion of Olympism as a philosophy of life. His concept was built on core principles including the Greek ideal of the well-rounded person with physical, moral, intellectual, and artistic qualities and the belief that international athletic competition can uplift and inspire the character of the world and generate cross-cultural friendships and understanding as a basis for world peace.

This ideal — the concept that real victory is in the pursuit, not the prize — is certainly not universally accepted, but it is by no means extinct. It is the underlying premise of Josephson Institute’s sports initiative “Pursuing Victory With Honor.” Visit Josephson Institute’s Center for Sports Ethics to learn more.

More articles about the Olympics in Josephson Institute’s Sportsmanship Blog.