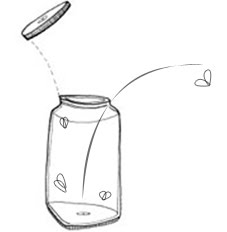 Positivity is a powerful change agent. For one thing, people who go through life with the positive perspective that the glass is half full are much happier and more productive than those who see it as half empty. It has nothing to do with how much water is really in the glass. What matters is how we think about how much water is in the glass.

Positivity and optimism, then, are intrinsically beneficial states of mind. But that’s just half of it. Positivity can actually change reality. First, people who are cheerful and optimistic have more friends and more opportunities simply because they are more likable than pessimists and cynics.

Second, people with positive outlooks are far more likely to overcome challenges and achieve success because they try.

I’m told that if you put fleas in a jar, they will jump out, but if you put a lid on the jar, the fleas will eventually learn to jump just high enough to avoid hitting the lid. If the lid is later removed, the fleas, conditioned by past failure, will still not jump high enough to get out of the jar.

It’s a sad irony that the hopeless and desperate young man who set himself on fire in Tunisia probably had no idea that his suicide would start a chain of events that would topple his government by inspiring other frustrated Tunisians to protest and to try to jump out of the jar that confined them.

And seeing it could be done, thousands of angry citizens in Egypt, Yemen, and Jordan have begun their own revolutionary movements, which most certainly will change the political landscape of the Arab world, and which prove that one man can positively make a difference.