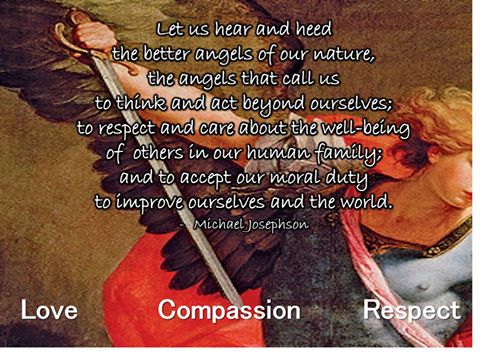 On May 6, 2016 Michael Josephson addressed about 250 religious and civic leaders in South Orange County, CA. The powerful and provocative presentation received a standing ovation.

It began with this invocation:

“Let us hear and heed the better angels of our nature, the angels 22 that call us to think and act beyond ourselves; to respect and care about the well-being of others in our human family; and to accept our moral duty to improve ourselves and the world.”

To see a summary of the presentation and view / download the slides please go to WhatWillMatter.com/InterfaithMovement. 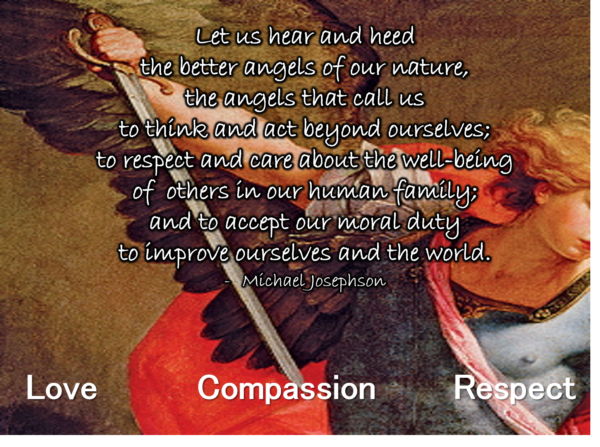 Let us hear and heed the better angels of our nature, the angels that call us to think and act beyond ourselves; to respect and care about the well-being of others in our human family; and to accept our moral duty to improve ourselves and the world. – Michael Josephson

To see the other side, to defend another people, not despite your tradition but because of it, is the heart of pluralism. — Eboo Patel

All RELIGIONS, all this singing is one song. The differences are just illusion and vanity. The sun’s light looks a little different on this wall than it does on that wall and a lot different on this other one, BUT IT’S STILL ONE LIGHT. — Rumi

Do not be daunted by the enormity of the world’s grief. Do justly, now. Walk humbly, now. You are not obligated to complete the work, but neither are you free to abandon it. — The Talmud

Religion is a candle inside a multicolored lantern. Everyone looks through a particular color, but the candle is always there. – Mohammed Nequib

Like the bee gathering honey from different flowers, the wise person accepts the essence of the different scriptures and sees only the good in all religions. – Gandhi

Our ultimate duty to God is to live up to the best that is in us. – derived from Mordecai Kaplan

You can’t force anyone to love you but you can refuse to allow them to make you stop loving them.

All that is necessary for the triumph of evil is that good men do nothing. – Edmund Burke

TODAY I want to speak beyond platitudes. I want to do more than make you think more deeply about your opportunities and obligations to employ your faith to improve the world. I want to inspire you to act, to do more, no matter how much you are now doing.

I want to speak to your heart and encourage you to follow its guidance knowing that compassion becomes powerful through action.

As I do so I want to remind you of two important convictions I’ve developed over the years:

As we examine whether religion is the problem or solution we must recognize two conflicting human tendencies:

IS RELIGION THE PROBLEM OR THE SOLUTION?

The Critical Concept of Pluralism

PURPOSE OF THE INTERFAITH MOVEMENT Organizations and individuals active in the interfaith movement seek to:

What can you do?