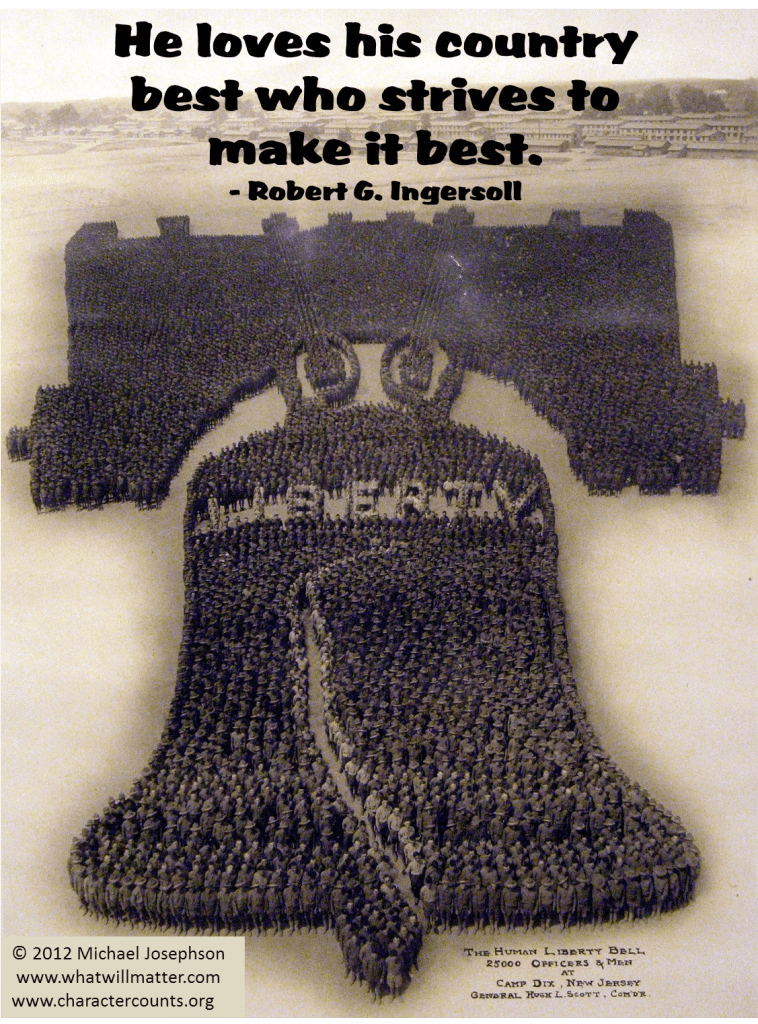 He loves his country best who strives to make it best.  – Robert G. Ingersoll

This nation will remain the land of the free only so long as it is the home of the brave.  ~Elmer Davis

Our country, right or wrong.”  When right to be kept right; when wrong to be put right.  ~Carl Schurz

[One’s] country is not a certain area of land, of mountains, rivers, and woods, but it is a principle; and patriotism is loyalty to that principle.  ~George William Curtis

Our country is not the only thing to which we owe our allegiance.  It is also owed to justice and to humanity.  Patriotism consists not in waving the flag, but in striving that our country shall be righteous as well as strong.  ~James Bryce

America is a song that sounds the best when we all sing together – at least for a while. Michael Josephson

Love your country.  Your country is the land where your parents sleep, where is spoken that language in which the chosen of your heart, blushing, whispered the first word of love; it is the home that God has given you that by striving to perfect yourselves therein you may prepare to ascend to him.  ~Giuseppe Mazzini

What we need are critical lovers of America – patriots who express their faith in their country by working to improve it.  ~Hubert H. Humphrey

What is the essence of America?  Finding and maintaining that perfect, delicate balance between freedom “to” and freedom “from.”  ~Marilyn von Savant

We on this continent should never forget that men first crossed the Atlantic not to find soil for their ploughs but to secure liberty for their souls.  ~Robert J. McCracken

When an American says that he loves his country, he means not only that he loves the New England hills, the prairies glistening in the sun, the wide and rising plains, the great mountains, and the sea.  He means that he loves an inner air, an inner light in which freedom lives and in which a man can draw the breath of self-respect.  ~Adlai Stevenson

He is a poor patriot whose patriotism does not enable him to understand how all men everywhere feel about their altars and their hearthstones, their flag and their fatherland.  ~Harry Emerson Fosdick

How often we fail to realize our good fortune in living in a country where happiness is more than a lack of tragedy.  ~Paul Sweeney

The stern hand of fate has scourged us to an elevation where we can see the great everlasting things that matter for a nation; the great peaks of honour we had forgotten – duty and patriotism, clad in glittering white; the great pinnacle of sacrifice pointing like a rugged finger to heaven.  ~David Lloyd George

And I’m proud to be an American, where at least I know I’m free. And I won’t forget the men who died, who gave that right to me. ~Lee Greenwood

America is much more than a geographical fact.  It is a political and moral fact – the first community in which men set out in principle to institutionalize freedom, responsible government, and human equality.  ~Adlai Stevenson

Ours is the only country deliberately founded on a good idea.  ~John Gunther

If you take advantage of everything America has to offer, there’s nothing you can’t accomplish.  ~Geraldine Ferraro

Oh, it’s home again and home again, America for me! I want a ship that’s westward bound to plough the rolling sea. To the blessed land of Room Enough beyond the ocean bars, Where the air is full of sunlight and the flag is full of stars. ~Henry Van Dyke

This, then, is the state of the union:  free and restless, growing and full of hope.  So it was in the beginning.  So it shall always be, while God is willing, and we are strong enough to keep the faith.  ~Lyndon B. Johnson

America is another name for opportunity.  Our whole history appears like a last effort of divine providence on behalf of the human race.  ~Ralph Waldo Emerson

It is the flag just as much of the man who was naturalized yesterday as of the men whose people have been here many generations.  ~Henry Cabot Lodge

There is nothing wrong with America that cannot be cured by what is right with America.  ~William J. Clinton

Our great modern Republic.  May those who seek the blessings of its institutions and the protection of its flag remember the obligations they impose.  ~Ulysses S. Grant

We need a type of patriotism that recognizes the virtues of those who are opposed to us….. The old “manifest destiny” idea ought to be modified so that each nation has the manifest destiny to do the best it can – and that without cant, without the assumption of self-righteousness and with a desire to learn to the uttermost from other nations.  ~Francis John McConnell

A real patriot is the fellow who gets a parking ticket and rejoices that the system works.  ~Bill Vaughan

We have enjoyed so much freedom for so long that we are perhaps in danger of forgetting how much blood it cost to establish the Bill of Rights.  ~Felix Frankfurter

We dare not forget that we are the heirs of that first revolution.  ~John F. Kennedy

The American Revolution was a beginning, not a consummation.  ~Woodrow Wilson