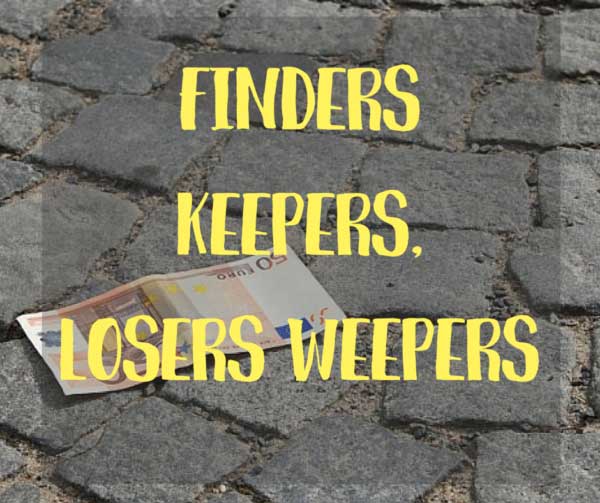 When Molly found a child’s purse with three quarters inside, she chanted, “Finders keepers, losers weepers.”

But her mom said the right thing to do was to return it to the person who lost it, and they went to the Lost and Found office.

A week later, Molly found a dollar bill on a table. “We’ve got to go to the Lost and Found again,” she said.

This time her mom replied, “That’s not necessary. It’s only a dollar.”

“But Mom,” Molly protested, “you said we have to find the owner.”

Mom was right to reject the “finders keepers” principle, but is there is a moral difference between returning a child’s purse and the dollar bill? I think so.

The value of found property is important ethically and practically. The more it’s worth, the more the loser is likely to suffer from its loss and make efforts to recover it. This imposes a higher duty on the finder.

It’s not just monetary worth that matters. It’s the value the owner attaches to the lost item that’s most important. Thus, the purse with three quarters was probably worth a lot more to the little girl who lost it than the dollar bill was to its owner. Can you imagine how happy she would be to get it back?

What’s at play here is a form of the Golden Rule: If you lost the property, how important would it be to you to get it back? At the core of ethics is caring for others and the willingness to go out of our way to bring pleasure to someone’s life or ease their pain.