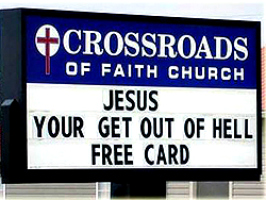 It’s hard to look at the world and some of the people who seem to get ahead without occasionally asking ourselves why we should be ethical. However normal it is to think like this, the question should be off limits for people who profess strong religious beliefs. After all, what religion does not mandate morality?

To authentically religious people, the motivation toward virtue is grounded in the acceptance of a nonnegotiable duty to be a good person in the eyes of God, not in anticipation of personal benefits. Dishonest, irresponsible, or unfair conduct is simply wrong.

Although there are skeptics who are suspicious of the rhetoric of religious advocates and proselytizers, there is a positive correlation between religious conviction and virtue. I think the vast majority of deeply religious people draw guidance and strength from their beliefs and live better if not perfect lives.

Still, religious claims and even sincere convictions are no guarantee of genuine righteousness.

Besides disturbed individuals such as those who believe God commands them to perform horrible acts, discredited televangelist preachers, and priests who molest parishioners, we must face the fact that Bernie Ebbers of WorldCom and John Rigas of Adelphia, the masterminds of some of the world’s greatest swindles, were highly vocal and visible about their Christian beliefs.

Whether such wrongdoers are mentally ill, hypocrites, frauds, or sincere believers with personal weaknesses, their stories remind us that we can’t take for granted the link between religious claims and worthy conduct. It’s not that religion fails people; it’s that people fail their religion.

In the end, regardless of its source, righteousness is revealed in ethical and upright conduct, not rhetoric.