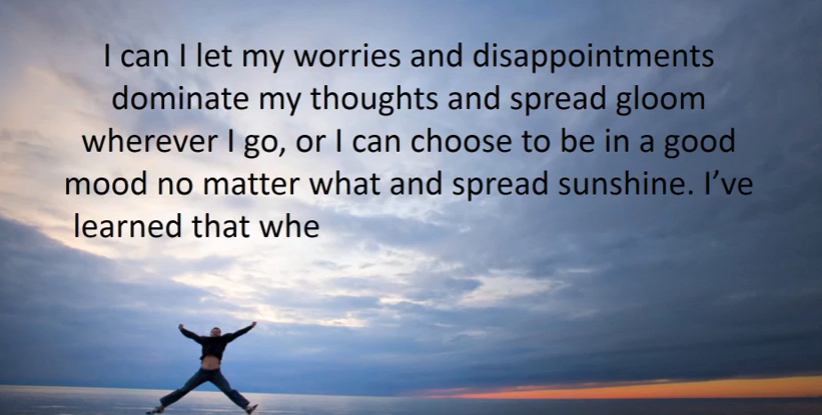 Michael was always upbeat. Some found his relentless good moods annoying, but attempts to mock or belittle his cheerfulness were just more fuel for his good nature.

Once he explained to a friend how he did it. “Every morning I look in the mirror and say good morning to myself. I see a note on the mirror that says ‘Choose,’ which reminds me I have a choice: I can I let my worries and disappointments dominate my thoughts and spread gloom wherever I go, or I can choose to be in a good mood no matter what and spread sunshine. I’ve learned that when I’m enthusiastic about life, I feel better. Usually so do others.

Years later, Michael fell off a high tower and almost died. When his old friend visited him, he was bandaged and bruised but as cheerful as ever.

He told his friend that when he regained consciousness and saw the doctors look at him as if he were dying, he resorted to his old habit of making a choice. “I could accept that my injuries were fatal, or I could choose to live. I chose to live.”

His friend remarked surely it wasn’t that easy.

“Maybe not,” Michael said. “But when they were preparing me for surgery, a doctor asked if I was allergic to anything. I said, ‘Apparently I’m allergic to gravity.’ He laughed.

“Maybe my positive attitude helped, maybe it didn’t. I choose to believe it did.”