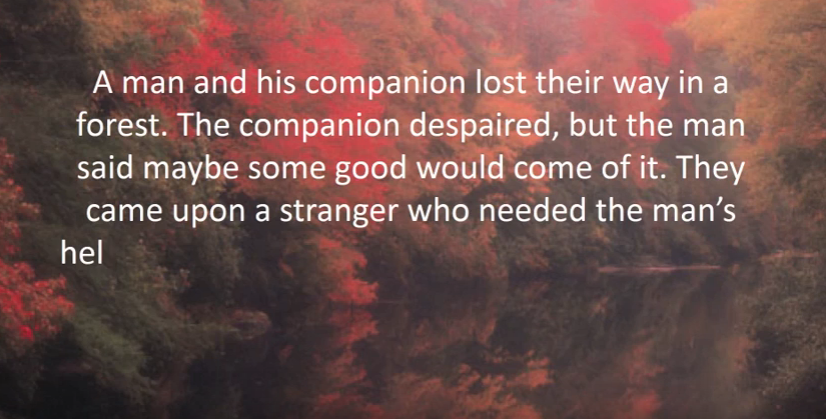 A man and his companion lost their way in a forest. The companion despaired, but the man said maybe some good would come of it. They came upon a stranger who needed the man’s help. The stranger turned out to be a prince who gave the man a beautiful horse.

His neighbors praised his good luck and said, “How blessed you are to have such a magnificent animal.”

The man said, “Who’s to say whether this is a blessing or a curse?”

The next day the horse ran away, and the neighbors said, “How horrible that you were cursed with the loss of your horse.”

The man replied, “Who’s to say whether this is a curse or a blessing? Perhaps some good will come of this.”

The next day the horse returned leading five wild horses. “You were right!” his neighbors exclaimed. “The curse was a blessing in disguise. Now you’re blessed with six horses.”

The man replied, “Perhaps, but who’s to say whether this is a blessing or a curse?”

The next day his only son tried to ride one of the wild horses. He was thrown to the ground and broke his leg. The neighbors said, “How wise you were. Your blessing really was a curse.”

The man replied, “There may be good yet. Who’s to say whether this is a curse or a blessing?”

The next day soldiers came through the village and took every able-bodied boy to fight in a war where it was almost certain all would be killed. Because the man’s son was injured, the boy was the only one not taken. “How blessed are you to keep your son!” the neighbors said.

The man replied, “Who’s to say? I don’t know whether there’s a curse in every blessing, but I am sure there’s a blessing in every curse.”