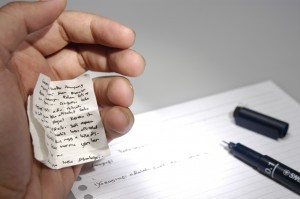 According to the 2010 Josephson Institute Report Card of American Youth,  a survey of more than 40,000 high school students, a majority of students (59 percent) admitted cheating on a test during the last year, with 34 percent doing it more than two times. One in three admitted they used the Internet to plagiarize an assignment. On lying, more than two in five said they sometimes lie to save money (48 percent of males and 35 percent of females). While 92 percent of students believe their parents want them to do the right thing, more than eight in ten confessed they lied to a parent about something significant.

“As bad as these numbers are, they appear to be understated,” said Michael Josephson, president of the Institute and a national leader in ethics training. “More than one in four students confessed they lied on at least one or two survey questions, which is typically an attempt to conceal misconduct.”

This does not bode well for our future when such a high percentage of young people accustomed to cheating and lying enter the workforce as corporate executives, politicians, police officers and journalists.

See this powerful short video on cheating from Values.com http://www.values.com/inspirational-stories-tv-spots/91-Classroom