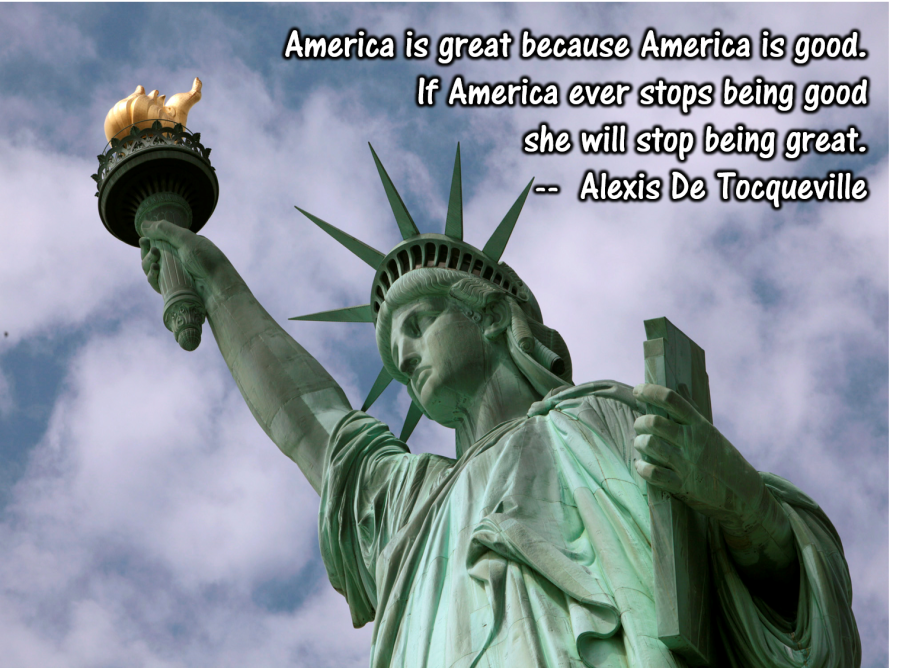 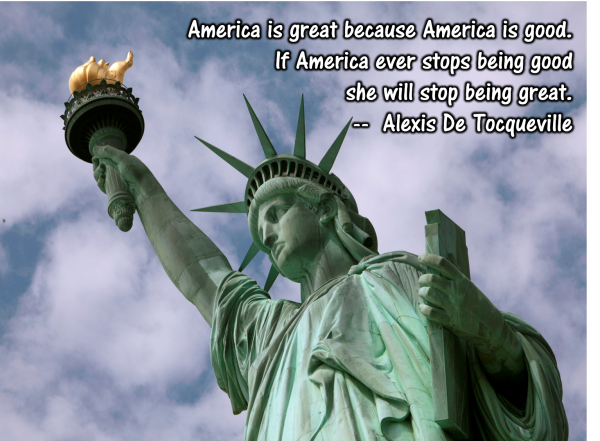 “America is great because America is good. If America ever stops being good she will stop being great.” – Alexis De Tocqueville ————–

Republican or Democrat, conservative or liberal, if you are following the news I hope you share my dismay and concern about fear-mongering demagogic rhetoric which has been embraced by millions of Americans desperately seeking to feel safe.

Just as the propaganda and terror strategies of ISIS have induced thousands of men and woman to join their cause, they have induced a handful of unwitting, scared and  shallow-thinking would-be American leaders to join their jihad against western civilization.  These converts advance the cause of the terrorists by stoking fears based on aggrandizing the threat so that they can characterize every single Muslim as a threat and propose extreme safety precautions that are immoral, unconstitutional and counterproductive. They are also fundamentally un-American.

The proposals evoke comparisons to the nation’s internment of all Japanese Americans after the bombing of Pearl Harbor. Treating all people of Japanese descent as potential enemies is now universally thought to be a shameful chapter in our nation’s history resulting in reparations and apologies. Still it is worth acknowledging that this action took place after a massive sneak attack and a formal declaration of war against the entire nation of Japan and its ally, Germany. Given the vast military resources of these countries we did face an existential threat (i.e., our existence as a nation was at risk).

What the demagogues are trying to sell us today is less justified and thus more outrageous than the awful mistake we made with Japanese Americans.

As frightening as the threat of random violence and mass killing by affiliated or inspired Islamic-based groups is, it is foolish to compare this to the threat we faced during an all-out war against the Axis of Japan and Germany.

If ever FDR’s invocation, “all we have to fear is fear itself” was applicable it is now.

Of course, we would be foolish to not take the threats to our safety from the ISIS movement seriously. Major defensive and offensive actions are justified. We can hunt the terrorists, assassinate their leaders with drones, bomb their camps, offices and oil fields; we can  launch a major cyber counterattack and seek to disrupt their communications and we might even have to send soldiers to root them out.

What we should never do, however, is allow the relatively remote possibility of victimization to induce us to surrender our freedoms to live our live’s and enjoy our liberties. If we do, we will give our enemies more than they could possibly win by force. The test of character and values is adversity and if we surrender all we thought we believe in out of fear, they really weren’t our principles at all.

We must realize that the enemies within, the reckless demagogues whose irrational and false rantings urge us to persecute all followers of the Islamic faith, are every bit as dangerous as the fanatics who would gladly kill us. They are enemies of democracy who would put us on a path taken by the worst regimes in world history.

Blaming and banning all Muslims for the actions of a few plays directly into the hands of the foreign enemies who are eager to characterize our efforts as an all out war on the entire Muslim religion.

Resisting hate rhetoric and rejecting impractical, illegal and immoral proposals is not the defense of political correctness but an expression of our commitment to the principles underlying our culture and constitution.

I don’t think these demagogues or their proposals will ultimately prevail, but I fear the impact on our ideals will be durable if not permanent.

Seee other comments of Michael Josephson at www.whatwillmatter.com