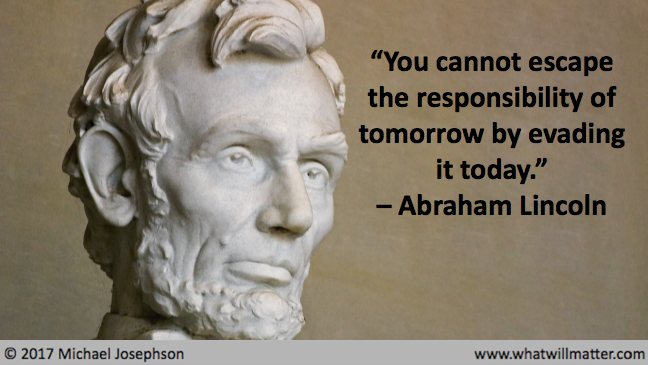 I wish we still celebrated Lincoln’s birthday. I’m an Abraham Lincoln groupie. By sheer good fortune, my son Justin was born on his birthday, my daughter Abrielle was named after him, and one of our dogs is named Lincoln. My favorite place in Washington D.C. is the Lincoln Memorial where I stand in awe of the magnificent eloquence of this self-educated, self-made man.

His ability to empathize and his genuine caring for others is constantly revealed in his letters and speeches. And though he felt the pain of others as deeply as any man could, fate and duty made him commander in chief during our nation’s bloodiest war.

Although we know him as an effective leader, in his own time he was more often ridiculed than revered, sometimes belittled as an unrefined bumpkin. Personally he was prone to self-doubt and depression.

I have no illusion that he was a perfect man. His flaws and his awareness of them make him all the more admirable in my eyes.

He frequently struggled between his keen sense of political pragmatism and his compelling idealism. Despite occasional compromises and mistakes, he is indisputably and justifiably one of the most esteemed men in history, leaving a legacy of honor, integrity, courage, compassion, and wisdom.

Lincoln understood the difference between real character and reputation, describing character as a tree and reputation as its shadow. His face is carved on Mount Rushmore and adorns both our penny and five-dollar bill.

But it’s Lincoln’s “tree,” his character, that stands so tall and strong and honors our nation.