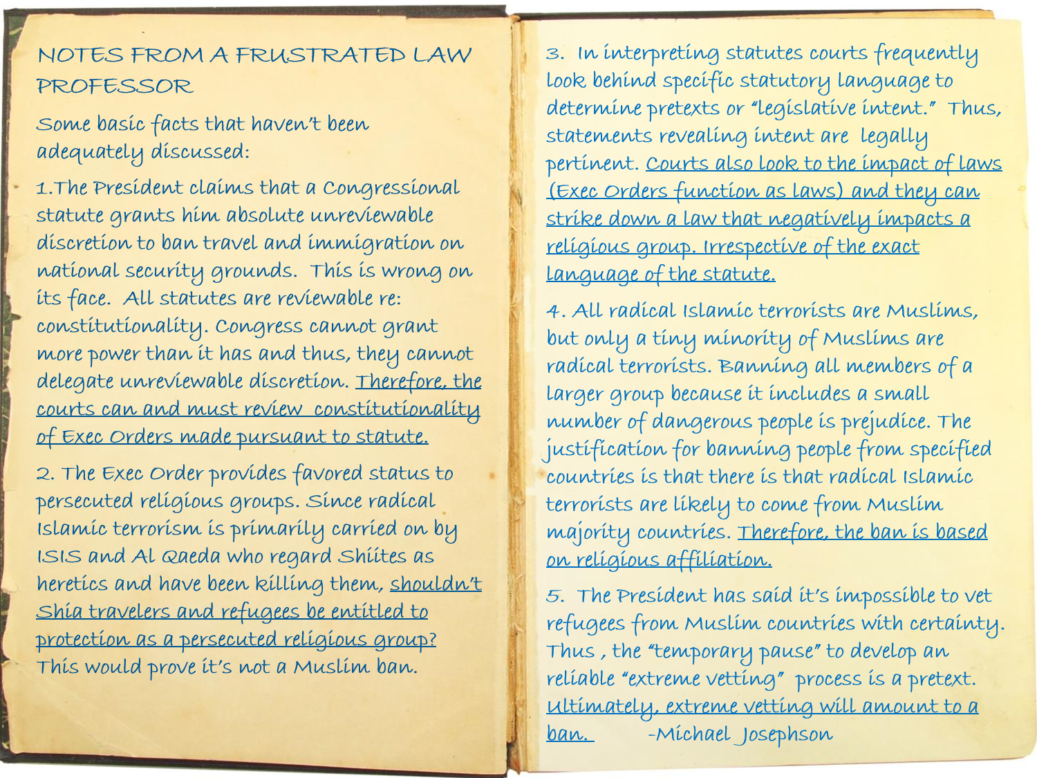 Michael’s Reflections on the Current Travel Ban Controversy.Whatever our position on travel bans to protect us from terrorists we have an ethical duty to understand the legal, practical and, of course, the moral dimensions of the issue. I think there are legal, practical and moral arguments supporting each position but we must base actual policies on facts and rigorous analysis. Here are some factors to consider.

1. The President claims that a Congressional statute grants him absolute unreviewable discretion to ban travel and immigration on national security grounds.  This is wrong on its face. All statutes are reviewable re: constitutionality. Congress cannot grant more power than it has and thus, they cannot delegate unreviewable discretion. Therefore, the courts can and must review constitutionality of Exec Orders made pursuant to statute.

3.  In interpreting statutes courts frequently look behind specific statutory language to determine pretexts or “legislative intent.” Thus, statements revealing intent are legally pertinent. Courts also look to the impact of laws (Exec Orders function as laws) and they can strike down a law that negatively impacts a religious group. Irrespective of the exact language of the statute.

4. All radical Islamic terrorists are Muslims, but only a tiny minority of Muslims are radical terrorists. Banning all members of a larger group because it includes a small number of dangerous people is prejudice. The justification for banning people from specified countries is that there is that radical Islamic terrorists are likely to come from Muslim majority countries. Therefore, the ban is based on religious affiliation.

5.  The President has said it’s impossible to vet refugees from Muslim countries with certainty. Thus , the “temporary pause” to develop an reliable “extreme vetting”  process is a pretext. Ultimately, extreme vetting will amount to a ban.          –