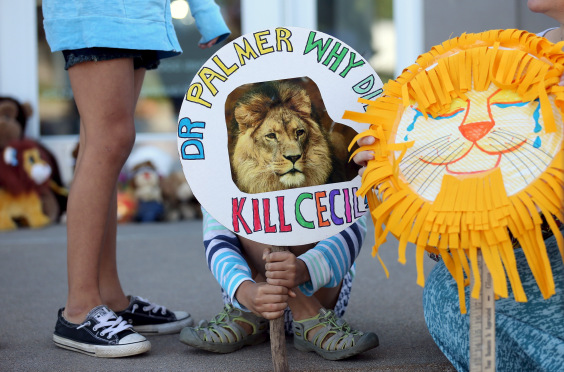 As President Trump is currently reviewing a recent decision to reverse previous prohibitions of bringing animal trophies into the country – a decision which has a huge impact on the trophy hunting industry and threatens to take the incentive out of these personal quests – it is important to acknowledge the massive moral issues involved.

Trophy hunters seek to deflect the ethical implications of killing animals for pleasure or glory with economic arguments (it’s good for the economies of countries with wildlife), conservation claims (it is good for the animal populations themselves) and personal freedom assertions (if its not illegal I have a right to hunt). it’s a fair fight (if I use a high power bow and arrow it is somehow more justifiable) and dubious rationalizations (as long as i eat the meat its legitimate). Rarely argued but implicit in the mindset of trophy hunters seems to be a genuine belief that killing wild animals is no more morally significant than harvesting wheat.

None of these arguments have successfully withstood scrutiny or research – they are simply rationalizations. The conservation claims are particularly dishonest or at least delusional. No possible conservation theory could possibly justify the efforts of hunters to find, kill and stuff the very best of each species – animals selected for their size, beauty, rarity or some other extraordinary feature that increases the emotional value of the trophy.

Thus, trophy hunters not only ignore the moral judgment of the vast majority of Americans who believe killing of believe is immoral they justify their indulgence with false claims and/or blind adherence to implausible excuses..

In 2015 the issue was prominent after the “the Internet lit up with articles condemning the death of Cecil, a popular lion with a distinctive black mane who was beloved by the local ecotourism industry because of his comfort around humans. That comfort proved to be Cecil’s undoing when an American trophy hunter, who paid $55,000 for the privilege of hunting lions in Zimbabwe, lured Cecil out of the confines of Hwange National Park and shot him with an arrow. Cecil was mortally wounded and survived for 40 hours before being found and killed by the hunter.” https://howtoconserve.org/2015/08/21/trophy-hunting-myths/
How we treat animals says a lot about our state of civilization and personal morality. Take a stand before we take a giant step backwards in acknowledging the sanctity of life.

7 drawbacks to trophy hunting as conservation