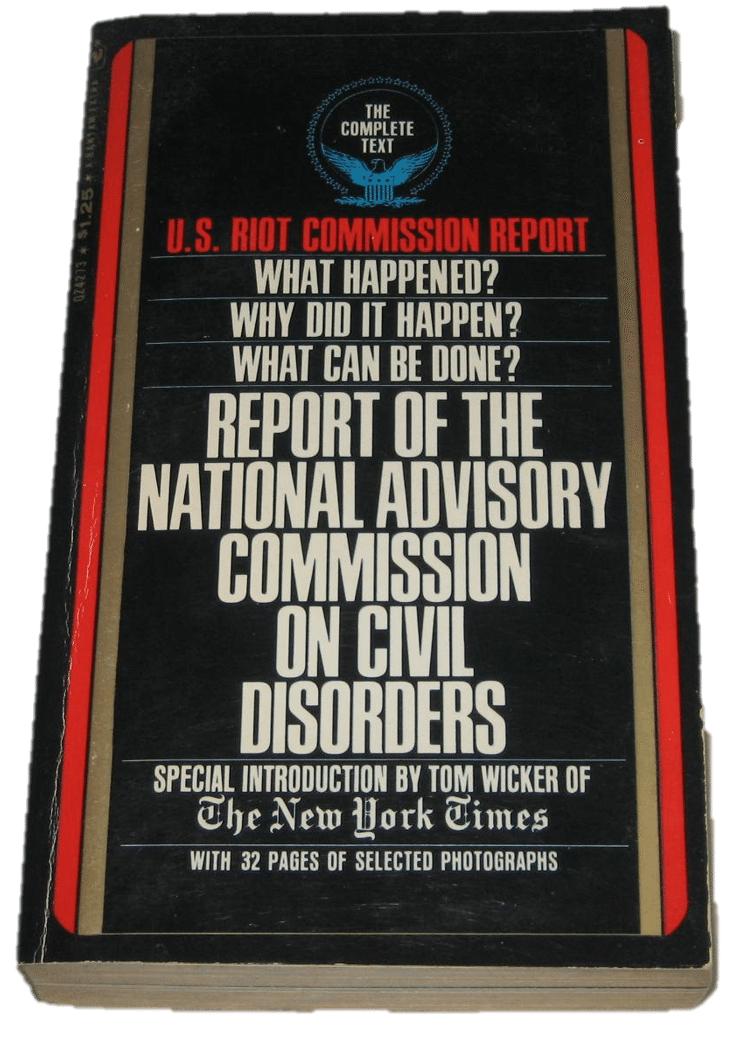 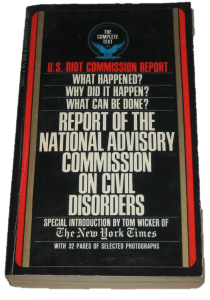 The summers of 1964-1967 were marked by civil disorders, rioting and looting in African-American neighborhoods of major cities including Los Angeles (Watts Riot of 1965), Chicago (Division Street Riots of 1966), Newark (1967 Newark riots) and Detroit (1967 Detroit Riots) In all, these disorders resulted in millions of dollars of damage[1] and the loss of 83 lives.

In response, President Lyndon Johnson appointed an 11 person blue ribbon commission in 1967 headed by former Illinois Governor Otto Kerner to answer three questions: What happened? Why did it happen? What can be done to prevent it from happening again?

In 1968 the Kerner Commission issued a report[2] that quickly became a best seller – more than two million copies of the report were purchased. It’s most quoted and controversial statement was its one sentence conclusion: “Our nation is moving toward two societies, one black, one white — separate and unequal.”

The Report was filled with examples supporting this conclusion and the underlying theme that the African American community suffered from great disparities in every aspect of social life and that unless the trend was reversed through massive social programs and attitudinal changes the disparities would widen and the hostility of black Americans would escalate.

President Johnson, who had already accomplished the extraordinary feat of getting Congressional approval of the Civil Rights Act and the Voting Rights Act, ignored the report and rejected the Commission’s recommendations. The conclusions of the report tended to be supported by those who identified themselves as liberals and rejected by conservatives.

In April 1968, one month after the release of the Kerner Report, rioting broke out in more than 100 cities following the assassination of civil rights leader Martin Luther King, Jr.

An important aspect of the Kerner Report that was never disputed was that in a list of 12 prominent grievances and concerns that motivated or supported the riots, the number one concern was “police practices.” Specifically, the report stated: “The atmosphere of hostility and cynicism is reinforced by a widespread belief among Negroes in the existence of police brutality and in a “double standard” of justice and protection—one for Negroes and one for whites.”

Sound familiar? Here we are 46 years later hearing the same theme which sparked destructive riots and demonstrations in Ferguson Missouri protesting the failure of the grand jury to bring an indictment against a police officer who shot and killed an unarmed black man, Michael Brown; and in the, so far, peaceful demonstrations in New York and other cities protesting the failure of a Staten Island Grand Jury to bring charges against an New York City police officer who was videotaped causing the death of another unarmed black man with a choke hold formally prohibited by the NYPD ten years ago.

Those of us with a sense of history see these protests as a reprise of the riots that followed the acquittal of the officers who were also videotaped mercilessly beating another black man, Rodney King.

Thus, despite mountains of reports, new rules, policies and training materials, accompanied by sincere rhetoric, the likelihood of explosive incidents like the current ones in Ferguson Missouri and New York City seems as great or greater than it ever was and wall to wall news and social media attention makes things a lot worse.

This is documented by subsequent studies done in 1998. The Eisenhower Foundation, to mark the thirtieth anniversary of the Kerner Report, sponsored two reports examining its conclusions and recommendations. One of the reports, co-authored by former Senator Fred R. Harris, found the racial divide had grown in the subsequent years with inner city unemployment at crisis levels. The report, titled, The Millennium Breach,[3] concluded that in the decade after the Kerner Report, America made progress on the issues of race, poverty, and inner cities but that in the subsequent decades (1978-1998) progress stopped and even was reversed by various economic and social events and government policies. The Harris Report stated: “Today, thirty years after the Kerner Report, there is more poverty in America, it is deeper, blacker and browner than before, and it is more concentrated in the cities, which have become America’s poorhouses.”

On the other hand:

Similarly, the numbers of master’s degrees earned by Black and Hispanic students more than doubled from 1999–2000 to 2009–10 (increasing by 109 percent and 125 percent, respectively). As a result, among U.S. residents in 2009–10, Black students earned 12 percent and Hispanics earned 7 percent of all master’s degrees conferred, up from 9 percent and 5 percent, respectively, in 1999–2000. In addition, the number of doctor’s degrees awarded increased by 60 percent for Hispanic students and by 47 percent for Black students” (NCES, 2012).

[1] One of the characteristics of the social reaction to these events were wildly exaggerated estimates promoted by the news media concerning the damage. Contemporary press estimates of the Detroit riots, for example were set somewhere between $200 and $500 million. The actual damage calculated many months later was about $45 million about 20% of the lowest estimate and less than 10% of the higher estimate.