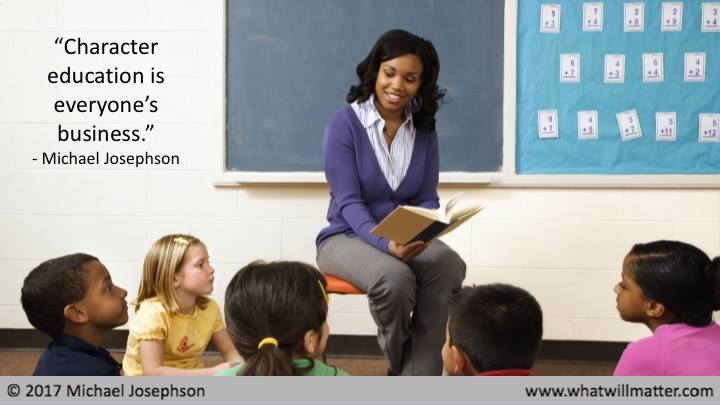 When I talk to parents and teachers about the role of schools in teaching character someone usually points out that character development is and should be the primary concern of parents. Who can argue with that? Many of the attitudes and habits that make up character are learned at home. But they’re learned elsewhere as well — on the school bus, in the cafeteria, on the playground, in the classroom, on the sports field, and while hanging out with friends.

Our children and grandchildren are growing up in a complex and disturbingly dangerous environment. We need to be concerned not only with their ability to make good choices but with the character of those they befriend and date. Character education is everyone’s business.

Historically, teachers were welcome partners, joining forces with parents to teach children moral principles and develop in them the self-discipline to live up to those principles. Today, neither teachers nor parents seem as comfortable with that partnership. That’s a pity.

You see, whether it’s a formal goal or not, schools are inevitably and unavoidably involved in character education. Most everything that occurs in the school setting either reinforces or undermines the virtues associated with good character: trustworthiness, respect, responsibility, fairness, caring, and good citizenship. Asking whether schools should be involved in character education is silly. The only question is whether they take this part of the job seriously enough.

Teachers, counselors, coaches and every other adult that interacts with kids has a chance to influence their beliefs, ambitions and conduct. The CHARACTER COUNTS! strategy, built on the acronym T.E.A.M., — T E A M — sets the agenda: teach, enforce, advocate, and model ethical values. You’ll be amazed what we can accomplish working together.